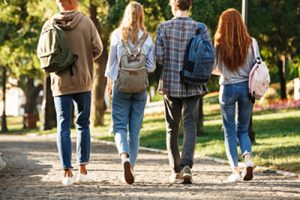 One of the main concerns of parents when they are considering relocation to Spain, is of course the quality of the education available. Alongside questions around the type of employment opportunities available and the overall quality of life, education is one of the key factors in deciding where to eventually settle.

If, as is often the case, the family does not speak Spanish fluently, this often leads them to consider the option of an international school in Spain. There are no shortage of options in this regard. With a large, thriving community of expats already living there, those looking for a Spanish private school will find any number of options available.

Although the level of education in state schools is overall quite good, the language barrier can be unsurmountable for many parents, and an option to consider here is enrolling the child in a bilingual school. As might be expected, part of the curriculum is given in Spanish, and part in another language – most commonly English or German, but smaller more specialised schools do offer other languages, so it’s worth investigating.

Bilingual schools offer the best option for fast tracking a child’s language skills and they will often become fluent within a much shorter time than was expected. The desire to keep up with peers and to feel included can be a great motivator, although it can be the case that children sharing the same native language will often form cliques and stick together.

Bilingual schools will most often follow the Spanish curriculum which can lead to studying for the International Baccalaureate (IB) Program, which is recognised internationally and well respected. They tend not to be quite as expensive as truly international Spanish schools, and monthly fees will begin at around the 700€ mark. As with most school fees in Spain, you will find this doesn’t cover costs for any books required (lists of which are generally supplied before term begins), or any after school activities such as sports. If any meals are taken at school these will also be charged extra as will attendance of any breakfast club or early drop-in facility, which are very handy for working parents.

In reality, private education in Spain can be quite a costly affair, and the quality available can vary a great deal. You can choose between extremely small, very specialised schools, such as Montessori, which cater for relatively few pupils; or much larger schools that are part of an international network worldwide. There are options to study in only one language, and to follow the curriculum of other countries such as the UK or US and qualify in foreign examinations including GCSE, A level and American High School Diploma. Fees at an international school are more likely to be around the 1000 to 1,500€ per month region, but again this won’t cover the extras, and any requirement for school uniform will need to be factored in along with transport costs. Many schools do run bus services for students, but not for free.

The cost of education in Spain will also vary by region. Madrid and Barcelona naturally will have the highest fees due to population density and their being Spain’s main business centres. Also, it’s quite possible to find that even though good options are available in most areas, it can be the case that waiting lists are in use at the most popular schools, and priority may be given to students whose siblings are already in education at the same establishment.

Overall the costs can add up when sending a child to a private school in Spain, and even more so if boarding is to be a requirement. Between school fees, books and materials, school excursions, transport, meals and extra-curricular activities, costs can be averaged out between 1000 and 2000€ per month, more for boarders.

In choosing an international school, Spain offers a great many options. From bilingual schools teaching the Spanish curriculum, to French Lycée teaching totally in French. There are dedicated German, Italian and Russian schools reflecting the truly diverse multicultural society that 21st century Spain has become. Being aware of the relative costs can help to make important decisions that much easier when planning finances before relocating.

The above article was kindly provided by Blacktower Financial Management Group and originally posted at: https://www.blacktowerfm.com/news/800-cost-of-education-in-spain