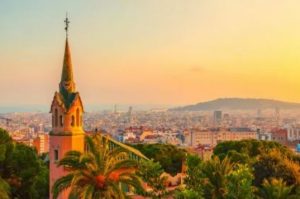 In popular culture, Spain is synonymous with sunshine, Paella, Flamenco and endless golden beaches.  All of which paint a familiar, and perhaps slightly old-fashioned view, of the fourth biggest member of the E.U.

There’s a lot more to this huge country than the easy stereotypes might suggest. There’s sunshine if you want it, but there’s also snow, desert, dense ancient forests where bears still roam free, and sleepy hill towns that appear not to have changed in a hundred years – nor seem likely to, in a hundred more.

There’s so much to commend it to the traveler, that they can be forgiven for beginning to dream a little, of what it might be like to live there, for real… for good. Let’s take a look at 5 cities in Spain where the prospective expat might think of living la vida local.

The country’s capital and most populous city. The cultural, political and economic centre of Spain. If you like to live life at a pace that synchs with one of the world’s major global cities, then Madrid will meet you head-on in a whirl of energy and Castilian chutzpah.

Choose to live in Madrid for arts, culture, the fantastic infrastructure and transport system, opportunities in a thriving jobs market and acres of parks and green space. Madrid is a truly international city to live in, it’s got everything you need for Spanish city life.

Spain’s second city, and capital of Catalonia ­– Barcelona has all the trappings of a major modern European metropolis and the beach. With a climate somewhat kinder than its close rival Madrid, Barcelona offers the city dweller ample opportunity to partake of the cosmopolitan, urban lifestyle – or to change tack and cool down on the stylish seafront.

The extensive public transport system makes it a breeze to get around, and with no shortage of sights, museums and parks to visit, the expat is spoiled for choice in this sun-drenched, classy Spanish destination.

The largest city in the Basque Country, Bilbao is situated on the Northern coast of Spain within easy reach of the Pyrenees. Famous for the Guggenheim Museum, a widely admired architectural gem, Bilbao has seen enormous economic growth in recent years.

The climate here is warm and humid in contrast with the hot, arid weather of the sunny Southern climes – with a cost of living much more reasonable than Spain’s larger cities, so your money will go further. Bilbao is a great choice if you want the cooler air and access to some truly wild and spectacular countryside along with fantastic rugged beaches.

Spain’s third largest city nestles on the East coast of the country, where it enjoys a subtropical climate, proving very enticing for anyone looking to relocate to Spain. It enjoys all the benefits of city life, but on a scale more manageable for those not looking for the cut and thrust of capital living.

Well known as being the birthplace of the world-famous dish paella, Valencia is a thoroughly modern Spanish city that has lost none of its tradition and is a popular choice for international expats looking to relocate.

The historic city of Malaga on the Mediterranean coast of the Costa del Sol, lays claim to a fascinating and eventful past, that it wears proudly on its handsome streets and avenues. With an average 300 days of sunshine per year, it’s easy to see why so many people flock here from all over the world. The laid-back Andalusian way of life encourages people to slow down. Work-life balance is the way of life here and anyone looking to settle and escape the pressures of 21st century, always-on culture, would do well to consider Malaga as a place to live.

The above article was kindly provided by Blacktower Financial Management Group and originally posted at: https://www.blacktowerfm.com/news/784-the-best-5-cities-to-live-in-spain